This is the first in a series of articles about modern forgeries of Ancient British coins. The articles will give detection points that reveal the fakes. Some of these were known as long ago as the 1980s, but were withheld from publication. Authenticators normally hold information in reserve, not wanting to alert the forgers to all their mistakes.

It is reasonable to ask why it is safe to reveal this information now. The answer is that the revelation will scarcely help the forgers today. They have improved their work considerably since the mid 1990s, changed tactics entirely, or have left the numismatic scene.

In 1985, a number of cast forgeries of Durotrigan silver staters appeared on the market. Crudely made, they were immediately condemned by the numismatic trade. At the time, two dealers contacted me about the fakes, and urged me to publish them. By late 1985, however, the fakes were driven from the scene and the urgency to publish subsided. They were eventually published in the 1989 edition of Celtic Coinage of Britain.

Incredibly, in 1992 the cast fakes started to reappear and were reported complete with bogus findspot information (1). It is possible these bogus finds may have been added to distribution maps drawn since 1994, and thus the archaeological record may have been falsified as a result (2).

The 1985 forgeries appear to be cast using the lost-wax method. For a detailed understanding of the process, see Larson, 2004, “Numismatic Forgery”. The casting method may be outlined thus:

Two of these forgeries appear above (detailed descriptions can be seen by placing the cursor over the images). The metrological and metallurgical data are as follows (3):

The first thing to notice is the high level of zinc in the two coins. Genuine silver staters would have been made well before 35 BC. Zinc only became available after 28 BC when the Romans introduced coins made of orichalcum (brass, a copper/zinc alloy). The appearance of zinc in genuine British coins occurs much later. Thus the two coins can be condemned on metallurgical grounds.

The second thing to notice is the two coins are shaped differently, and show different portions of the original coin. Supposedly, coins made using the lost wax process should produce exactly the same thing. The forger has cleverly shaved the edges of the wax models to produce differently shaped coins. It is not true that lost-wax coins have to be identical. Having differently shaped examples does not prove the coins are genuine.

The third thing to notice is the coins are slightly light in weigh. Shaving the wax models to produce differently shaped coins reduced their sizes. This is probably the main cause of the low weights. The difference in the alloys of the two coins might have changed the weights ever so slightly, as well. Furthermore, the casting process would have resulted in differential shrinkage as the metal cooled off in the mould. This would have reduced the weight by perhaps 2-3% more. Although it is no longer true today that differential shrinkage must produce small, lightweight coins, it was almost certainly true in 1985.

The fourth thing to notice is both coins have very low relief and lack sharp details. Genuine silver staters are generally well struck with good relief.

This coin came to my attention first and has the most obvious errors. It was detected by Paul Withers and shown to me in October 1985. 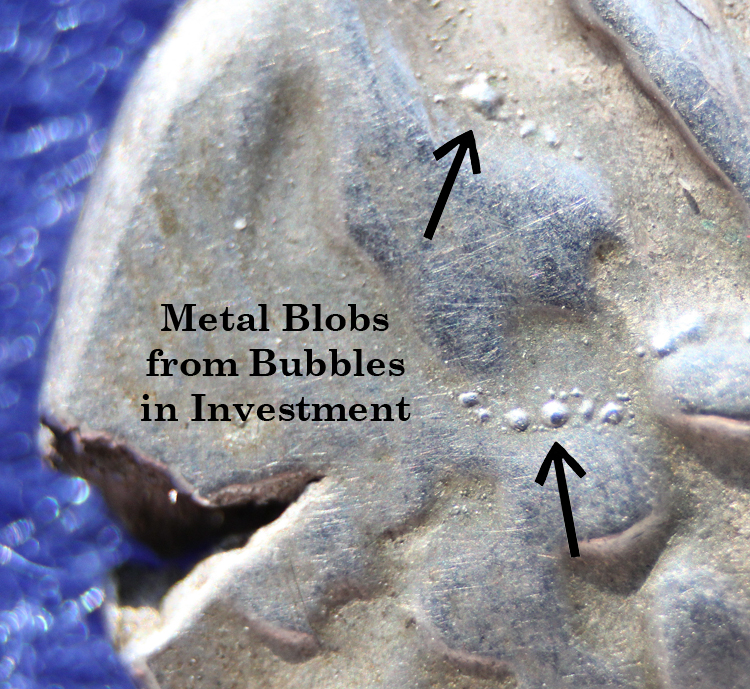 The most obvious error is that the forger failed to eliminate air bubbles when applying the investment plaster (4). Some air bubbles may have adhered directly to the wax model. Others may have been inside the plaster. These would have expanded and broken the surface of the mould during the wax burnout step. The resulting cavities filled with metal on casting, and produced blobs on the coin’s surface. 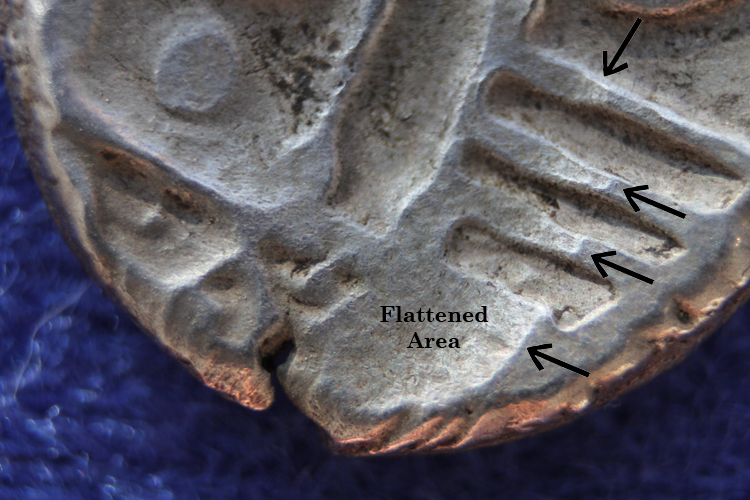 The forger made a second error when producing the flan crack (some people might be persuaded that the presence of a flan crack proved the coin was not a casting). This was done after the coin was cast. He hammered the finished coin to crack the edge. The hammering, however, created a “witness mark” – a flattened area on the coin’s surface with a clearly defined edge (arrows). The area to the left of the arrows is the area where the hammer struck. A third error was carelessly removing the casting sprue. The arrow shows where the sprue was attached. Inside the small, circular area there are rough file marks where the sprue was filed off. The long polished area to the left of the arrow is the area where the coin was polished for metallurgical testing. Although it is not obvious in the photo, the file marks and the metallurgical polishing are in different planes and have not affected one another.

This coin was brought to my attention after the one above, and shows the forger was trying to improve his work. The fake was detected by Lloyd Bennett and shown to me in December 1985. It lacks the metal blobs on the surface, and shows better attention to sprue removal. It does, fortunately, still have errors. 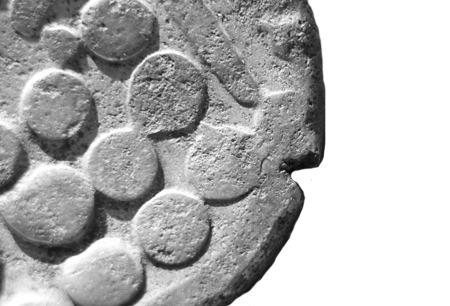 The forger again created a phony flan crack, but this time using a better technique. The only witness mark is an indistinct flattened area on the rim of the reverse. Probably, the coin was pressed in a vise until it cracked. Although there is no sharp hammer mark, the resulting crack isn’t very convincing on careful inspection. 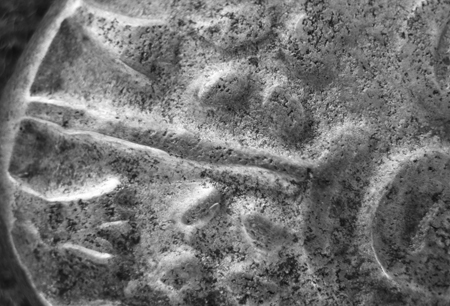 The coin has black material in every pit on its surface. 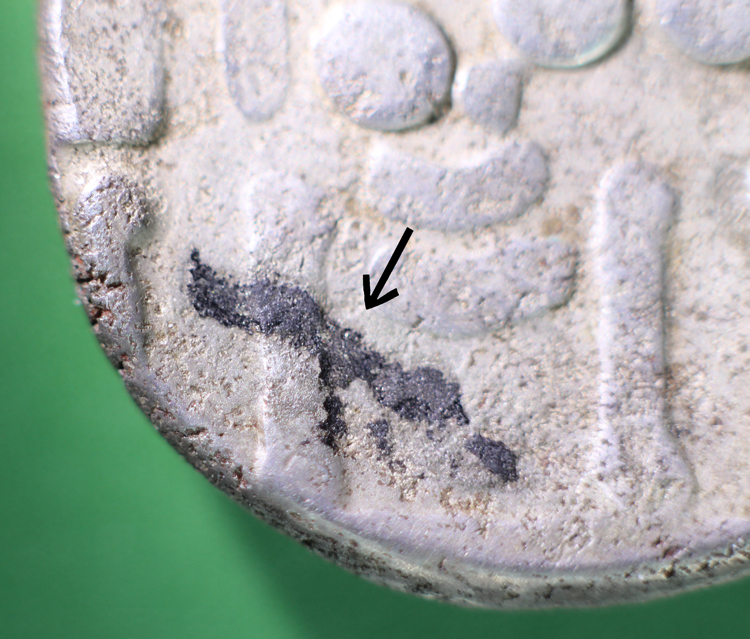 On the reverse, a large area of black residue also appears (arrow). There are several possible explanations for the residue. The first is that the mould has not been prepared properly, or the metal improperly poured, such that slag or other foreign material has been introduced during the casting process (5). A second explanation is that some “antiquing process” has left a residue on the surface.

There is a better suggestion, however.

Although no chemical tests have been performed, the material looks like carbon. This could have been formed during the wax burnout process. If the wax failed to exit the mould as it melted, some may have become trapped and turned to carbon. The carbon then adhered to the coin’s surface, producing black marks. Although it is almost impossible to believe the forger performed an incomplete burnout, incompetence seems to be a common thread throughout this saga of coin fabrication. Another error may add credence to the idea of an incomplete burnout. This error appears in the form of reddish deposits on the coin’s surface. It would be easy to dismiss these as some form of corrosion. But they don’t look like corrosion products under magnification. Instead, it is more likely that they are remnants of the investment plaster (or a mould release agent) that the forger failed to clean off. Though investment plasters are often a neutral gray, reddish ones are also known.

Significantly, some of the red material partially covers one of the black marks (arrow). This is exactly what should happen if the black marks are a wax disintegration product and the red mark is leftover investment plaster. The separation of the reddish material from the metal surface shows it is not always in contact with the coin. Thus it is not as likely to be a simple corrosion product.

In summary, suggestions for detecting incompetent cast forgeries are:

In general, these two coins show what is to be expected with incompetent casting techniques. In 1985, they fooled no one and were quickly condemned. The reappearance of these fakes in 1992 is probably a result of a few coming back on the market after some people had forgotten about them (and failed to follow suggestion number one).

Such ease of detection can lull one into believing that cast forgeries are easy to detect. Modern casting methods, using new materials can produce spectacular results. So the suggestions given here are not infallible for detecting better fakes.

This article first appeared in Celtic Coinage of Britain June, 2014

See Rodwell 1981a for a discussion of the problems of coin findspot reports.

See Boon, 1991 for a discussion of the falsification of the archaeological record.